A private opening reception for Museum members, donors and exhibiting artists for two new exhibitions will be held on Thursday, September 15, from 6 to 8 pm. The exhibitions will open to the public on September 16 and remain on view through April 2, 2023.

Both exhibitions meet two goals of the Museum’s five-year institutional strategic plan — one, to focus on the art of our place, and second, the art of our time. If you are not a member and would like to attend the opening reception and preview, join now>>

PowerLines Poets, a Mobile-based poetry troupe featuring local writers and performers is returning to the Mobile Museum of Art for a slam poetry session. PowerLines Poets will be performing works inspired by MMofA’s special exhibition 3 American Artists and inviting guest poets to take the mic as well. Join us for an evening of spoken artistry.

Handbuilding in Clay with Denise Ralston

Experience the joy of creating with clay in this handbuilding class for beginner to advanced students. Instructor Denise Ralston will teach the basic techniques of pinching, coiling, and slab building as well as surface decoration and glazing. Bring your creativity and see what you can do! 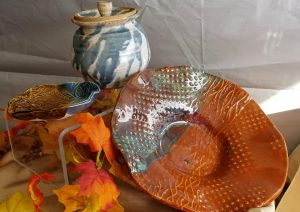 For a moment of peace and relaxation, we offer this meditation and mindfulness class in our Fantastical Forest! Led by an instructor experienced in working with children, students will be given the opportunity to recharge through quiet time and guided meditation. Classes will also have the option to be performed outside under the pavilion, weather permitting. Parents and students will meet in the Education lobby before each class starts for further instructions.

Duke University professor and photographer Alex Harris approached famed naturalist and scientist, Edward O. Wilson, after reading Wilson’s evocation of his Southern childhood in The Naturalist and Anthill. Following their meeting, Harris and Wilson collaborated on a book about Wilson’s native world of Mobile, Alabama. The photographer and the naturalist joined forces to capture the rhythms of this storied Alabama Gulf region through Wilson’s lyrical words and Harris’s photographic images capturing the mood of Mobile’s radical transformation city as it adapted to the twenty-first century. Their book became a universal story, one that tells us where we all come from and why we are here, and was titled “Why We Are Here: Mobile and the Spirit of a Southern City,” followed by an exhibition of the same title in 2012, presented at the Mobile Museum of Art.

Twenty years after that first exhibition, a selection of Harris’s photographs and Wilson’s evocative quotations are presented once again in a tribute exhibition and program celebrating the work and life of E.O. Wilson (1929-2021).

A special program, introduced by Mobile writer and filmmaker, Ben Raines, will be presented at the Mobile Museum of Art on Friday, October 7, 2022, 5 – 7:30 pm; the program of speakers and filmed selections will be followed by a reception and exhibition opening in the museum gallery.

This program is sponsored by The Carolyn W. Saunders Foundation, with additional support from the following partnering organizations:

“FOR CHILDREN: The Elements of Art and Design” closed

Spring Hill faculty Wanda Sullivan will lead a gallery talk with her colleague LaVada Raouf. Sullivan’s special exhibition Gardens of Hope examines the intersection between the natural world, her gardens, and the effects of climate change. LaVada Raouf is faculty at Spring Hill College, Mobile, Alabama in the Department of Visual and Performing Arts.

ABOUT Gardens of Hope

Gardens of Hope is the first solo museum exhibition of the work of Mobile-native Wanda Sullivan. In this exhibition, Sullivan examines the intersection between the natural world, her gardens, and the effects of climate change. Sullivan says about the flowers and nature featured in her work, “My flowers are beautiful, but they are monsters—contemporary, biomorphic Frankensteins. They are designed to seduce the viewer and lure them in, just like our dependency on fossil fuels, phones, tablets, and computers do.”

Join us for a morning talk with James — whose special exhibition, One Eye Sees, the Other Feels will open the same day. Her friend Jack Hitt is an American author and contributing editor to Harper’s, The New York Times Magazine, and This American Life. The two will lead us through a gallery talk in the special exhibition.

ABOUT One Eye Sees, the Other Feels

James is a fourth-generation Houstonian and seventh-generation Texan, and she is a graduate of Sewanee University. James’s exhibition for the Mobile Museum of Art is titled One Eye Sees, the Other Feels, a quotation from the writings of Swiss artist Paul Klee. This exhibition will feature more than 30 abstract works, including drawings and paintings ranging in size from small to monumental.

This fall, join us for a celebration of the life and work of E.O. Wilson, Mobile-native and father of biodiversity. On October 7, 2022, Mobile Museum of Art will open E.O. Wilson: A Photographic Tribute by Alex Harris and celebrate with a special opening.