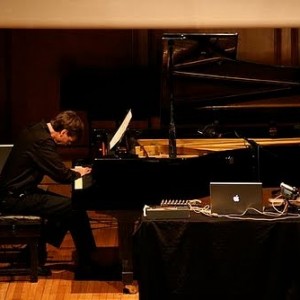 Join us for a night of original composition performances by University of South Alabama Professor of Music, David Durant, and friends.  The program will consist of compositions for acoustic instruments and digital media written throughout Durant’s 40 years of activity, solo and group improvisations, and new compositions by some of the other participants. Durant will be joined on the program by trumpeter and USA Professor Peter Wood; Associate Professor of Viola from University of Illinois, Rudof Haken, who is also a composer and will perform on his custom six string electric viola; composer and percussionist Luke Smith; percussionist Ryan Boehme; tenor Miles Garver; and mezzo soprano Vikki Turner.

David Z. Durant is a Professor of Music at the University of South Alabama where he is the Director of the Music Theory, Technology, and Composition Programs. Durant has composed over 140 works for a variety of soloists and ensembles and for digital media. Recently he has  performed in Italy, Spain, Puerto Rico, United Kingdom, and 15 other states in the U.S. Durant is an active performer and has premiered many of his own works. He is also widely acclaimed as an improviser on piano and low brass instruments. Durant has lived in Mobile, Alabama, since July 2003.