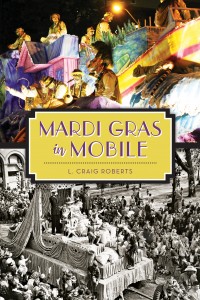 Mardi Gras in Mobile is the oldest Carnival celebration in the United States, beginning years before the city of New Orleans was ever erected. French Catholic settlers historically celebrated Mardi Gras in preparation of Ash Wednesday and the beginning of Lent. The celebration has evolved over centuries to boast numbers of over one million attendees for parades alone and remains the second largest community festival in the nation. Aided by extensive research and interviews, L. Craig Roberts explores the origins of Mardi Gras in The Port City and everything from the story behind Joe Cain Day to the allure surrounding the mystic societies and their infamous balls that are the backbone of Carnival festivities.

Craig Roberts is an architect, historian and preservationist in Mobile, Alabama. He received his bachelor’s degree in architecture from Auburn University. He volunteers as a docent at the Mobile Carnival Museum and is a regular lecturer on the topic of Carnival for the University of South Alabama’s Road Scholar program, among other sites around the state.