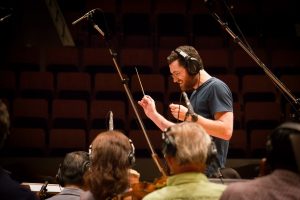 Mobile Museum of Art welcomes Mobile Symphony Music Director, Scott Speck and award-winning composer, Austin Wintory for a discussion of the role of the modern day composer and new works for orchestra, including the new genre of music written specifically for the video gaming industry. The talk will feature a discussion of Wintory’s new work, The Assassin Dances, which will be performed on January 28th and 29th as part of Mobile Symphony Orchestra’s Winter Romance concerts.

Austin Wintory made history when he wrote and produced the score in the PlayStation3 game Journey in 2012, the soundtrack of which debuted on the Billboard charts higher than any original score in gaming history. Journey went on to be the first-ever Grammy-nominated videogame score. Since then, Wintory has scored over 2 dozen games – including the hugely successful, Kickstarter-funded game, The Banner Saga, Ubisof’s Assassin’s Creed: Syndicate, ABZU, among others. He has also scored nearly 50 feature films, and his first major film score for the Sundance Film Festival-winning film, Captain Abu Raed, was shortlisted for the 2009 Academy Awards for Best Original Score by the LA Times. See full bio>>

Scott Speck’s gala performances with Yo-Yo Ma, Itzhak Perlman, Joshua Bell, Midori, Evelyn Glennie and Olga Kern have highlighted his recent and current seasons as Music Director of the Mobile Symphony. In addition to his wonderful work locally, he has also inspired international acclaim as a conductor of passion, intelligence and winning personality, with performances in London, Paris, Moscow, Beijing, New York, Chicago, San Francisco, Los Angeles and Washington. He is also the co-author of two of the world’s best-selling books on classical music for a popular audience, Classical Music for Dummies and Opera for Dummies. See full bio>>

Join us Wednesday, January 25th at 6 p.m. at the Mobile Museum of Art for light fare and a fascinating discussion with Wintory and Speck as they discuss this exciting new genre and its role in modern day symphonic repertoire.

$5 suggested donation (all proceeds go to MSO). Seating is limited.