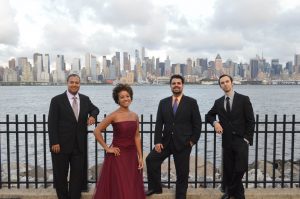 Mobile Symphony Orchestra is bringing the Harlem Quartet into the Museum galleries for a rare, not-to-be-missed performance, surrounded by notable artworks by Harlem Renaissance artists, Romare Bearden, Jacob Lawrence, and images of jazz great Wynton Marsalis by Faith Ringgold. The concert will feature a lively and entertaining mix of music ranging from classical to jazz.

The performance is in the Mobile Museum of Art’s East Gallery upstairs. This is a free event, including parking and admission to the concert and gallery for the duration of the performance. Doors to the gallery will open at 6:10 pm. Seating is limited.

The Harlem Quartet is “bringing a new attitude to classical music, one that is fresh, bracing and intelligent,” says the Cincinnati Enquirer. The quartet’s mission is to advance diversity in classical music by engaging young and new audiences.

The quartet has been fulfilling that mission through a yearlong education residency with the MSO by performing in various areas of the community. The residency is sponsored, in part, by a grant from the Community Foundation of South Alabama.

ABOUT THE HARLEM QUARTET
Since its public debut in 2006 at Carnegie Hall, the New York-based ensemble has performed throughout the U.S. as well as in France, the U.K., Belgium, Panama, Canada and in South Africa, where under the auspices of the U.S. State Department they spent two weeks performing concerts and participating in outreach activities.