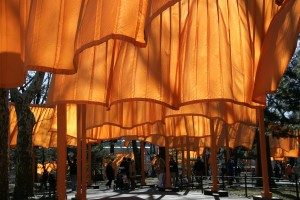 Blackwood Productions Inc. was founded in 1966 in New York by film maker Michael Blackwood to produce documentaries on innovation in the arts. MMofA will show two films from their collection.

Christo & Jeanne Claude
“The Gates” in New York’s Central Park after more than 20 years of negotiation and struggle. In this portrait, the indefatigable duo reviews all their main projects since 1958 beginning with their small wrapped objects. Major emphasis is placed on their decades long effort to obtain permission for the “Wrapped Reichstag” project – a landmark event in the history of both art and politics.

Robert Rauschenberg
Rauschenberg’s active involvement with life carries over into his painting. The combine-painting of the 1950s integrated two- and three-dimensional elements and inhabited both wall and floor space. These assemblages included discarded thrift shop-type objects such as automobile tires, stuffed birds, doors, and electric light fixtures, as well as the two-dimensional painterly surfaces reminiscent of Abstract Expressionism. This intense injection of real objects into his work was translated into another medium in the early 1960s: silkscreen painting. Robert Rauschenberg: Retrospective includes important examples of the artist’s diverse and extraordinary accomplishments, tracing his development from his student years and his earliest experiments to a retrospective of his work at the Museum of Modern Art in New York.