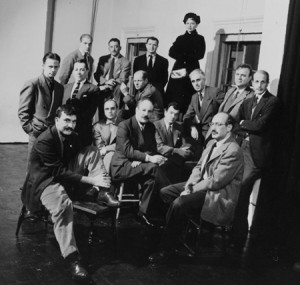 Blackwood Productions Inc. was founded in 1966 in New York by film maker Michael Blackwood to produce documentaries on innovation in the arts. MMofA will show two films from their collection.

The New York School
American art came of age with the first important modern movement by a group of New York painters who became known as Abstract Expressionists. In the 1940s and 50s their aggressive action painting challenged the School of Paris. Tenaciously American (though several were born abroad), these painters were not content to imitate European masters and styles. They were struggling to express their own transcendental values that emphasized freedom, impulse, and instinct, and favored large-scale canvases with broad, improvisational brushwork. Harold Rosenberg, author of the phrase “action painting,” offers his valuable insights, as does fellow critic Clement Greenberg. Predictably, the two differ in their opinions, keeping alive the issues raised by the paintings themselves.

American Art in the 1960s
During this critical decade in American life, artists built on the styles of the 1950s. An explosion of artistic energy produced Pop Art, Minimalism, color-field painting, and hard-edged abstraction. Sculptors and painters on both coasts explored new methods and new subject matter. American Art in the Sixties examines the key figures of that decade including Rauschenberg and Johns, two crucial transitional figures between Abstract Expressionism and the sensibilities of the new decade. The art of that time mirrors the optimism and the affluence, and the technology and the vulgarity of those boom years.