BESA: A Code of Honor

BESA: A Code of Honor

All photographs in this exhibition are by Norman H. Gershman

BESA: A Code of Honor is about the ‘Righteous Among the Nations’ – non-Jews who risked their lives saving Jews during the Holocaust. It is comprised of portraits and texts about Muslim families in Albania, who saved Jews during the Holocaust, converging between two seemingly opposed worlds. The remarkable assistance afforded to Jews during this time is grounded in BESA, the code of honor which still exists today. This help should be understood as a matter of national honor. These acts originated from compassion, loving kindness and a desire to help those in need – even those of another faith or origin.

Albania, a small and mountainous country on the southeast coast of the Balkan peninsula, was home to a population of 803,000. Of those only two hundred were Jews. After Hitler’s rise to power in 1933, many Jews found refuge in Albania. No accurate figures exist regarding their number; however, different sources estimate that 600-1,800 Jewish refugees entered that country from Germany, Austria, Serbia, Greece and Yugoslavia, in the hope to continue on to the Land of Israel or other places of refuge.

Following the German occupation in 1943, the Albanian population, in an extraordinary act, refused to comply with the occupier’s orders to turn over lists of Jews residing within the country’s borders. Moreover, the various governmental agencies provided many Jewish families with fake documentation that allowed them to intermingle amongst the rest of the population. The Albanians not only protected their Jewish citizens, but also provided sanctuary to Jewish refugees who had arrived in Albania, when it was still under Italian rule, and now found themselves faced with the danger of deportation to concentration camps.

The remarkable assistance afforded to the Jews was grounded in Besa, a code of honor which still today serves as the highest ethical code in the country. Besa, means literally “to keep the promise.” One who acts according to Besa is someone who keeps his word, someone to whom one can trust one’s life and the lives of one’s family.

The help afforded to Jews and non-Jews alike should be understood as a matter of national honor. The Albanians went out of their way to provide assistance; moreover, they competed with each other for the privilege of saving Jews. These acts originated from compassion, loving-kindness and a desire to help those in need, even those of another faith or origin.

Albania, the only European country with a Muslim majority, succeeded in the place where other European nations failed. Almost all Jews living within Albanian borders during the German occupation, those of Albanian origin and refugees alike, were saved, except members of a single family. Impressively, there were more Jews in Albania at the end of the war than beforehand. 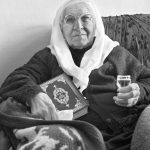 For more information about the Righteous Among the Nations, visit the American Society for Yad Vashem website>>

About this exhibition, al.com says:

“In a world that tends to focus on extraordinary heroes wearing capes and wielding amazing powers, it’s good to be reminded that heroes can be very ordinary people too.”