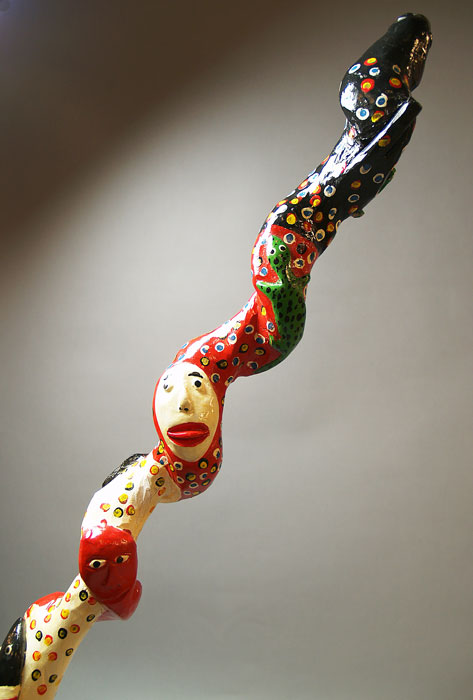 This collection of 119 folk art canes, a gift to the museum from Pat Connell, celebrates an artform that has a rich history of symbolic and spiritual meaning. As a child Pat was  fascinated at the ritualistic whittling by the men on his grandfather’s front porch. 50 years later, in 1988, a chance visit to an exhibition of folk-art canes in Kentucky rekindled this fascination and began his interest in collecting this traditional artform.

The cane or rod is such a basic tool that it predates our ancestors even becoming recognizably human. As such they are historically rich with meaning. From Moses’ staff to the ape’s discovery of the power of a bone in 2001: A Space Odyssey – a bone that transformed into a spacecraft –  the cane symbolizes the mystery of the mind finding leverage over its environment.

Regardless of whether it is a golden scepter or length of branch, a cane can represent the status of the individual, protect against attack and aid in mobility.  The woods they are come from are part of their visual allure and often have mythic elements associated with the source tree. Folk art canes are the most democratic of art forms; anyone can make a cane. They are a part of America’s culture and art, speaking to our capacity for self-expression, of personal communication and group identity. They are, in the words of Pat Connell, “the male expression of self-worth, status and intellectual energy that the female ‘album quilt’ accomplishes.”

Pat Connell is Professor Emeritus of Architecture at Georgia Tech University and served as an advisor to the city of Atlanta’s restoration of Folk Art Park.

Organized by the Mobile Museum of Art