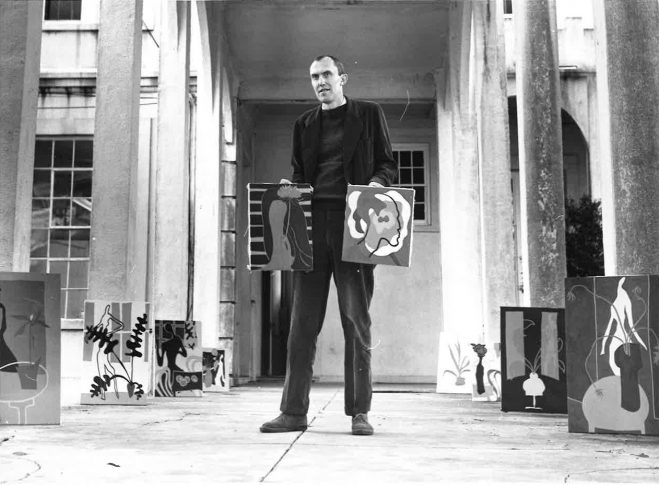 Lee Hoffman exhibited nationally and was a beloved painter and art personality of the Mobile area along with his wife and fellow artist, Kaye Wall Hoffman. This exhibition shows the diverse and ever changing talents of Hoffman’s career from 1960 until his passing in 2010.

His teaching duties at USA included painting and portraiture – and occasionally summer watercolor classes in Paris.

“I would take students all over Paris. We got to experience different ways of life, diverse architecture and great paintings.”

He loved teaching and strongly expressed to his students the need to see art in person:

“Not only the size, but the paint quality is different. For example, a lot of the roughness that is in Matisse’s paintings does not show up in pictures. Look at the actual painting, and his paint is very thin. Sometimes it has been scraped over several times. Picasso, on the other hand, used a lot of the impasto and built-up paint, like in the ‘Girl Before the Mirror’. That thing is a jewel. The paint glows, it’s so rich. But, you do not see that in slides or pictures. So you have a completely different sensation from the painting.”

In the mid-1970s, Hoffman traded his oil paints for watercolors. After a few years of experimentation, he settled in comfortably as an on-location (or plein aire) painter of outdoor scenes. Later, in the early 2000’s he returned to his studio for inspiration.

Lee M. Hoffman’s contribution to the Mobile arts community is undeniable. He was a great teacher and consummate artist who worked lovingly, methodically and with perfect mastery of whatever medium he approached.

This exhibition is generously underwritten by:

Dr. and Mrs. Charles Rodning
in Honor of the families of Christopher Bernard, Soren Piers and Kai Johannes Rodning