Throughout her career as an artist, Mobile, AL, native Monica Beasley has explored concepts of feminism, femininity, home, marriage, family, race, and Southern culture. Monica works in many mediums from photography and conceptual work to painting and collage. At first glance, the viewer is attracted to the tactile materials and use of bright colors, yet each piece is deeply rooted with serious subject matter.

Monica attributes much of her influence to her strong and loving mother and her many cherished aunts. Three of the works in this exhibition are titled and dedicated to three of these aunts. She is also influenced by the nkisi of Central Africa, the Hopi Native American tribe, and Haitian spiritual art. Teacher, friend, and well-known painter Ed Paschke, as well as artists Ellen Gallagher and Kerry James Marshall have also had tremendous influence on her life and work. In speaking about Paschke’s impact in particular, Monica notes, “He opened my eyes to everything already in the universe. You just have to go look for it, to rethink it, repurpose it, and let it shine in a different way.” 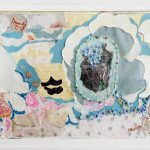 Ritual of Desire, 2001, Mixed media on burlap mounted on board 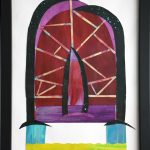 The Temple of My Familiar, 1997, Collage on paper 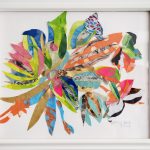 Everything Reminds Me of You, 2014, Collage on paper

This exhibition is organized by the Mobile Museum of Art.